The head of the economy of South Korea and the United States said they are ready to cooperate to supply liquidity if foreign currency liquidity becomes tight. At the meeting in July, the comments “we have room for cooperation” are evaluated as “ready for cooperation”, which is a step forward.
According to the Ministry of Strategy and Finance on the 1st, Choo Kyung-ho, Deputy Prime Minister and Minister of Economy and Finance, held a conference call with US Treasury Secretary Janet Yellen on the afternoon of the 30th of last month Korea time to discuss global economic trends, foreign exchange market cooperation, the US Inflation Reduction Act (IRA), and Russian crude oil. We discussed price ceilings, etc. The conference was held at the request of the US Treasury Department.
Regarding the turmoil in the foreign exchange and financial markets, the two Ministers assessed that Korea has sufficient foreign exchange reserves and maintains strong external stability. In addition, the Ministry of Finance confirmed that the two countries are ready to work closely together to implement a liquidity supply mechanism if necessary, such as worsening financial instability due to the spread of the liquidity crunch in major countries, including Korea, and decided to continue negotiations. . The liquidity supply the two ministers mentioned includes the Korea-US currency swap, which ended at the end of last year.
The will of the finance ministers of the two countries to cooperate is evaluated as a step forward from what was discussed at the meeting of the Korean-US finance ministers held in Seoul on July 19th. At the July meeting, the Ministry of Strategy and Finance said in a press release that they share the perception that “(Deputy Prime Minister Chu and Minister Yellen) have the ability to implement various cooperative measures, such as delivery devices liquidity, if necessary.” 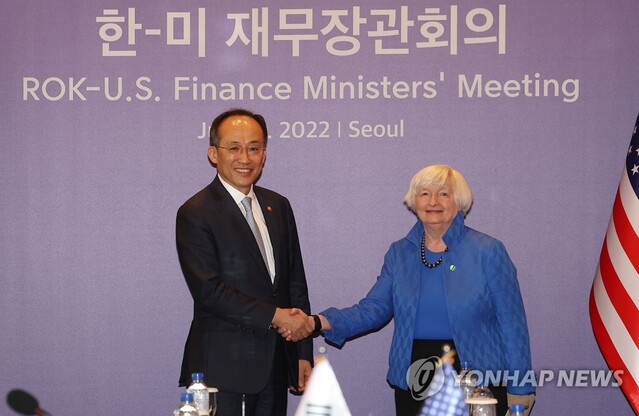 During the conference call, views were exchanged on proposed issues between the two countries, such as the IRA. The Ministry of Strategy and Finance said that Deputy Prime Minister Choo once again conveyed the disadvantages and concerns of the Korean electric vehicle industry regarding the implementation of the IRA and asked them to pay attention to solving the problem, and Minister Yellen said that they should continue closely. cooperation between the two countries.
Earlier on the 29th of last month, President Yoon Seok-yeol met with US Vice President Kamala Harris at the Yongsan Presidential Office, and said, “Based on the spirit of the Korea-US FTA, we look forward to working” n close together to reach a mutually satisfactory agreement,” he said. In response, Vice President Harris said that President Biden is well aware of South Korea’s concerns, saying, “I will take good care to find a way to resolve South Korea’s concerns in the law enforcement process .”

Meanwhile, Deputy Prime Minister Choo and Minister Yellen shared the view that global uncertainty is increasing due to the protracted war between Russia and Ukraine, the World Bank’s Pandemic Response Financial Intermediation Fund (FIF), and so forth.