On the afternoon of the 12th, a series of large-scale rallies were held near Gwanghwamun in Seoul, attracting around 100,000 citizens. Opposing voices erupted from both sides with Sejong-daero in the middle, but fortunately there was no major conflict. On this day too, there were voices in memory of the victims of the Itaewon disaster.

The Korean Confederation of Trade Unions held the ‘100,000 National Workers Rally’ from 3:00 pm on the same day. In a rally attended by 60,000 police and 90,000 organisers, the participants demanded a review of Articles 2 and 3 of the Union Act and a halt to privatisation. He commemorated the victims of the Itaewon disaster and called for the punishment of those responsible.

Chairman Yang Kyung-soo said in his speech on the day, “The death march continues in workplaces and throughout society by Yoon Seok-yeol’s government, which shirks responsibility.” He claimed.

He continued, “Since it was sending signals to 112 and 119 in Itaewon, the government did nothing to the cries of workers who wanted to live. Do not block the third volume, this is our request.”

As tens of thousands of citizens gathered, the leadership of the Korean Confederation of Trade Unions deployed 500 order-keeping personnel wearing orange vests in various places to prepare for any unexpected crowd incidents.

Members of the Korean Confederation of Trade Unions who are in charge of keeping order wear orange vests. Reporter Baekdam
Before this, from 1:00 pm on the same day, the United Freedom Party, led by Rev. Jeon Kwang-hoon, ‘national rally to eliminate the bad faction’ at nearby Donghwa Duty Free Shop in Jongno-gu . Police estimated that 10,000 people took part.

As the time they finished the rally and the time when the crowd of KCTU members gathered overlapped, a war of nerves broke out among some participants.

Sejong-daero was divided into left and right halves, and two groups with opposite tendencies held a large-scale rally, chanting slogans such as “Stop the lob corruption of the Yoon Seok-yeol government,” “Resign Yoon Seok-yeol,” There was “ Arrest of Lee Jae-myung,” and “Arrest of Moon Jae-in.” attached The police installed additional fences and cordons in case of an unexpected situation, but the rally ended without incident. 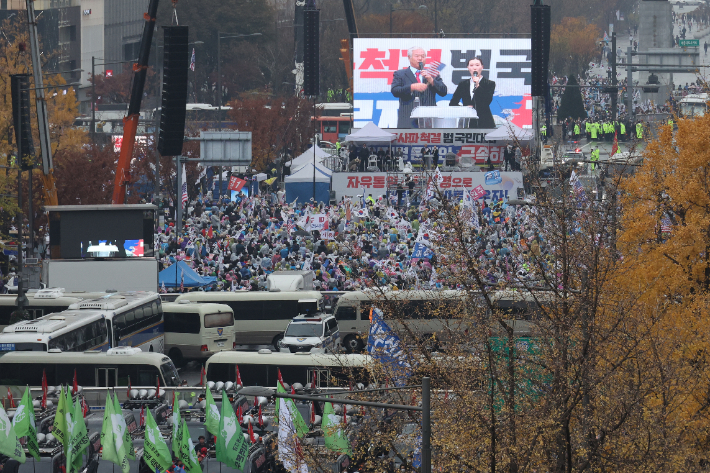 On the afternoon of the 12th, the Korean Confederation of Trade Unions (KCTU) and the Liberty Korea Party hold a rally in the Gwanghwamun district of Seoul with police barriers between them. random news
After the KCTU rally around Sejong-daero ended, around 100 civic groups, including the National People’s Action, continued a candlelight vigil to remember citizens in the same place, calling for ‘punishment of those who responsible for the Itaewon disaster’.

The candlelight vigil was expected to start at around 5:20 pm, but was delayed by around 20 minutes due to heavy rain and a larger than expected crowd. Despite the pouring rain, union members and citizens stood and chanted slogans such as “There was no government” and “Punish those responsible.”

At the rally that day, a young man who did rescue work on the day of the Itaewon disaster read a letter. He said, “I’m picking things up bit by bit as I read on the Internet that it wasn’t the fault of the people who went to Itaewon and that they were able to stop it, as well as other people who went to. the rescue.”

“It’s not their fault that they went to Itaewon, but they didn’t die from pushing each other, and they didn’t die because they didn’t have CPR training, but I see news that still blames them, ” he said. ” he added. 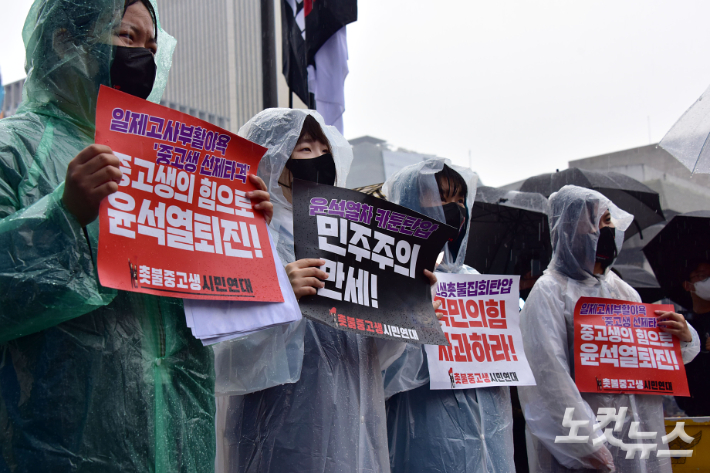 On the 12th, students belonging to Citizens’ Unity for Middle and High School Students Candlelight hold the first candlelight vigil for middle and high school students who resigned Seok-Yeol Yoon near Gwanghwamun Station in Seoul.Reporter Yoon Chang -won
On the other hand, in the afternoon of the same day, a ‘candlelight rally’ and ‘anti-fire rally’ were held on the roads in the Samgak area on Subway Line 4 near the president’s office.

The New Freedom Coalition, a conservative group, held a rally at 3:00 pm on the same day and called for an ‘arrest investigation of former government personnel’, and the ‘Candlelight Victory Conversion Action’, a progressive civic group, held a rally for 5:00 pm and related to the ‘Halloween Disaster’, demanding punishment for those responsible.

Meanwhile, traffic was controlled in downtown Seoul due to the rally that day. During the rally, the police controlled all lanes on Sejong-daero, except for the passage for emergency vehicles.